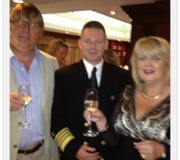 Our odyssey began in Athens, one of the world’s most ancient cities as well as the cultural and political capital of Greece. It’s well worth allowing a few days here in advance of your cruise to immerse yourself in the historic wonders that abound in this amazing city. A quick trip to the Acropolis is definitely not enough!
  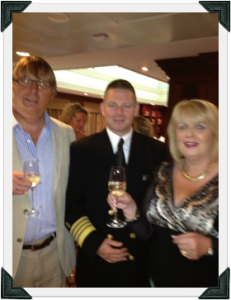 The seaborne part of the trip began with a stress- free embarkation process with no waiting or queues and after a champagne cocktail welcome on board drink, we were escorted to our Owner’s suite stateroom. Actually the term staterooms would be more accurate when referring to our capacious and luxurious accommodation. To be specific; a large drawing room with dining area, a double bedroom, about the same size as the drawing room, with acres of wardrobe and cupboard space, a large marble bathroom with a full-sized jacuzzi bath, a guest lavatory and a large balcony with sun loungers, bedecked with Egyptian cotton towels and a separate dining / drinks area. Whilst these rooms are the largest onboard all suite guests enjoy the same amenities such as priority (no queue) check-in and departure, complimentary dining in both speciality restaurants, butler room service, afternoon en-suite canopies and fruit, mini-bar with complimentary soft drinks and two bottles of spirits per voyage. I could go on but I think you’ve got the picture. The ship set sail around 6:30pm which is unusually early for Azamara ships to leave any port, as one of the features of this type of cruising is night time sailing which usually means that you have at least 12-14 hours everyday to explore whichever island or city you are either on or in. Dinner on day one was a sumptuous affair in the speciality steakhouse restaurant, Prime C. The food, wine and service were all first class, a standard that was consistently maintained throughout the voyage.

Day Two and we docked at the Turkish seaside resort of Kusadasi at around 9:00 am. Nearby is the fascinating archaeological site of Ephesus. Once the second largest city in the Roman Empire, The extensive ruins are an incredibly well preserved historical record of pre and post Christian civilisation. Back on board the early evening guest speaker in the cabaret theatre was a District Attorney from Los Angeles, who gave a very entertaining talk on celebrities who had been accused or murder. A subject he was well acquainted with as he had been a leading prosecutor in the OJ Simpson trial. Another excellent dinner in Discoveries, the ships main dining room, was followed by a few less than profitable spins on the roulette wheel! Time for bed!

Day three – Kos | Part of the Dodecanese group of islands, Kos is the one to pick if you’re looking for miles of pristine beaches and an upmarket harbour with yachts that could hold their own with anything in Monte Carlo or St Tropez. After lunch in a harbour front cafe, we took a one hour taxi tour (costing 35 euro) which was good value and the driver who was a very proud native of Kos brought us to his home village to give us a taste of traditional life away from the tourist traps. The ship was in port until 11:00pm, so we took our time getting back onboard, window shopping and cooling off with an occasional glass or two in the local hostelries. The evening’s entertainment was a magnificently displayed pool  deck buffet with carved fruit and ice sculptures at every turn, followed by a big band tribute to Michael Buble. BLISS

Day four – Rhodes | This turned out to be a bit of a “Busman’s Holiday” day. Having had quite a late night we had a lie in and stayed on board for lunch in the Windows cafe. Another excellent buffet in a part in-door, part al fresco restaurant which became a favourite of ours for drinks as well as food.  I had arranged to visit the Rodos Palace hotel, one of the largest 5 star properties on the Island and one which in recent years has become increasingly popular with many Clubworld clients. The property is only 6-7 miles from the main port and whilst the external appearance wouldn’t win any prizes for architecture, once inside the hotel I was very impressed with the high standards of restaurants, bars, pool facilities, shops etc. The whole complex is like a self contained resort, with room types to suit whatever requirements you may have, from spacious standard doubles with balconies or verandas, to luxuriously appointed garden suites with private pools. Back on the ship we continued the work theme and called round the Clubworld offices to see how things were going back home. It was during one of these conversations about the miserable Irish weather and the fact that with it being the 11th July, the offices would be closed for the next two days that I hit upon the brilliant idea that we should extend our stay onboard for another week. The next few hours were taken up with exploring the possibility and then confirming the arrangements, not least of which was changing our home bound flight from Athens to Istanbul. This was an unexpected stroke of luck as the flight from Istanbul turned out to be £800 less than our original booking, what more justification did we need? We decided to celebrate with a meal in the speciality fish restaurant Aqualina, yet another delicious experience. We ended the night in the Looking Glass nightclub, dancing to Abba and sharing “the craic” with some new friends Gerry & Laura from Seattle.

Day Five – Santorini | A wonder of the natural world, the Island was a massive volcano until about 1500BC when it erupted with such ferocity that it literally blew itself to pieces leaving only a ring of islands that was the outer rim and a central plug which was the volcano’s crater. The largest town on the island is Fira which sits on top of a 900ft cliff and has spectacular views of the Caldera and many of the surrounding Islands. The town can only be accessed from the seaward side by cable car or donkey. The choice is yours but I can tell you that the cable car is a much less odoriferous option. Fira is a beautiful maze of traffic free cobbled streets with pristine blue and white buildings many of which are perched on or built into the cliff face. We enjoyed an unforgettable lunch on the terrace of one of the most precipitous restaurants with just a railing between our table and a very long vertical drop to the sea. Our evening entertainment was a very professional show in the cabaret theatre featuring songs from various west end musicals, another excellent meal in Discoveries and a slightly more successful trip to the casino.

Day 6 – Chania (Crete) | Being the largest of the Greek Islands and in spite of having almost 15 hours in port we thought it wise to limit ourselves to the town of Chania with its narrow alleys lined with cafes, cheese and wine purveyors and local artisan workshops and its picturesque harbour full of fishing boats and pleasure craft. We had arranged to meet Gerry & Laura at one of the water front bars, where Gerry said he had organised a surprise. This turned out to be a leisurely three hour boat trip to some of the nearby Islands  and included lunch, snorkelling and an over abundance of Ouzo! Walking down the gangplank at the end of the trip proved to be quite wobbly experience. Back onboard we had organised our own surprise for Gerry & Laura. Raphael our brilliant butler had laid on an en-suite champagne buffet; a perfect end to a great day out.

Day 7 – Nauplion (Peleponnesia) | A major city port in the Aegean and once the capital of modern Greece, apart from Athens, this was by far the largest urbanised port of call on the cruise and as such we found it to be a stark contrast to the quaint villages with little or no motorised traffic we had become accustomed to. The old city, built by the Venetians in the twelfth century, was a little less hectic and well worth a visit. But the lure of the ship and the unfamiliar hustle and bustle of city life meant that our shore excursion was relatively short. The evening was spent as usual enjoying the ships food and shows and saying farewell to new found friends. By 7:00am the next morning we were back in Athens and originally due to fly back home that afternoon. Happily for us another week of cruising lay in store.

Just a footnote about the kind of cruising Azamara is; I can sum it up in two words, elegantly casual. The quality of food and service is, even by 5 star ship standards, the best. The ratio of staff to guests is virtually one to one. You NEVER have to wait for anything, including the lifts! I have been fortunate to sail with most of the major cruise lines and I am in no doubt that Azamara is now my favourite. Of course it’s not for everyone, I think families with young children for example would find it much less attractive than say a Royal Caribbean sister ship. Some of the soft furnishings and curtains are a little tired, (the Quest is due for a re-fit in November) but these are minor niggles and in no way detract from what was the best cruise experience I have ever had.

Clubworld’s Hints and tips for getting married abroad
We use cookies on our website to give you the most relevant experience by remembering your preferences and repeat visits. By clicking “Accept All”, you consent to the use of ALL the cookies. However, you may visit "Cookie Settings" to provide a controlled consent.
Cookie SettingsAccept All
Manage consent

This website uses cookies to improve your experience while you navigate through the website. Out of these, the cookies that are categorized as necessary are stored on your browser as they are essential for the working of basic functionalities of the website. We also use third-party cookies that help us analyze and understand how you use this website. These cookies will be stored in your browser only with your consent. You also have the option to opt-out of these cookies. But opting out of some of these cookies may affect your browsing experience.
Necessary Always Enabled
Necessary cookies are absolutely essential for the website to function properly. These cookies ensure basic functionalities and security features of the website, anonymously.
Functional
Functional cookies help to perform certain functionalities like sharing the content of the website on social media platforms, collect feedbacks, and other third-party features.
Performance
Performance cookies are used to understand and analyze the key performance indexes of the website which helps in delivering a better user experience for the visitors.
Analytics
Analytical cookies are used to understand how visitors interact with the website. These cookies help provide information on metrics the number of visitors, bounce rate, traffic source, etc.
Advertisement
Advertisement cookies are used to provide visitors with relevant ads and marketing campaigns. These cookies track visitors across websites and collect information to provide customized ads.
Others
Other uncategorized cookies are those that are being analyzed and have not been classified into a category as yet.
SAVE & ACCEPT
Scroll to top